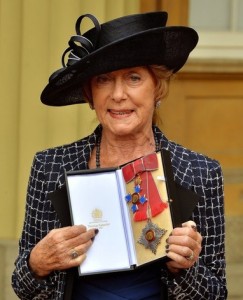 Gillian Lynne is a renowned star of the British Ballet and Theatre world. In 1997 she was awarded a CBE, in 2001 she was awarded the Queen Elizabeth II Coronation Award by the Royal Academy of Dance for her significant contribution to the dance industry and in the 2014 New News Honours list she became a Dame!

Lynne learnt to dance with her childhood friend (Dame) Beryl Grey and joined the Sadler’s Wells Ballet (later to become the Royal Ballet) during World War 2. She became an admired, dramatic ballerina – renowned for her roles as the Black Queen in Checkmate and Queen of the Willis in Giselle. After leaving the ballet she became a star of the West End in such roles as Claudine in Can Can and on film, starring opposite Errol Flynn.

Her most well known achievements however are in Choreography and Directing. She has worked on many productions for the Royal Opera House, Royal Shakespeare Company, English National Opera and many West End and Broadway shows. She is most renowned for her choreography on Andrew Lloyd Webbers musicals – namely Cats, Phantom of the Opera and Aspects of Love and for her acclaimed choreography on the West End musical of Chitty Chitty Bang Bang for producer Michael Rose.

The Gielgud Academy is deeply honoured to have the support of Gillian Lynne.

Photograph of Gillian Lynne at her investiture at Buckingham Palace, 2014.