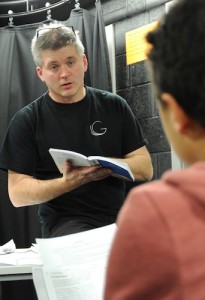 Ray has performed as an opera singer, musical theatre performer and stage actor throughout his career. He trained in the United States at the College of Idaho and Arizona State University in vocal performance in addition to a Screen Acting Course at The Academy Drama School. He graduated with a Masters of Music in vocal performance, Batchelor of Arts Music diploma.

His Musical Theatre credits include : The Phantom of the Opera (Raoul, U/S & played Phantom)  onBroadway and US Tour and Hamburg, The Sound of Music (Captain von Trapp)   at the Courtyard Theatre, Hereford, A Midsummer Night’s Dream (Demetrius) at the Derby Playhouse, Sweeney Todd (Anthony Hope) at the Derby Playhouse, Whistle Down the Wind (The Man)for Bill KenwrightUK Tour, Pirates of Penzance (Frederick)Off – Broadway and  HMS Pinafore (Ralph) Off – Broadway.

Ray is involved with Youth Theatre in Sussex and is currently Director of Drama at Cumnor House School and previously Head of Drama at Farlington School. He has directed and produced such shows as Guys and Dolls, The Pirates of Penzance, Whispers in the Graveyard, Oink, What a Knight, Love Me Tender, Godspell, and the premier of Coyote and the Enchanted Ottoman.